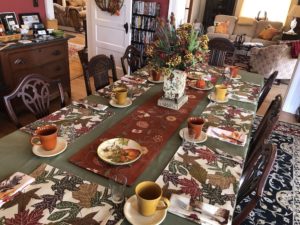 Every morning at breakfast, eight different people who’ve never met, gather around the Inn table and start their day.

People coming together who’ve never met before that become friends.

When I first started serving breakfast at the Inn, I was concerned about how I would get complete strangers to warm up to one another. Little did I know how small the world really was!

With a little prompting from their breakfast matchmaker and server, I watched as guests from distant corners of the globe found something in common with their breakfast neighbors.

Guests discovered that their fellow diners actually lived just blocks from one another, or knew the same people, or years before lived in the same neighborhood. 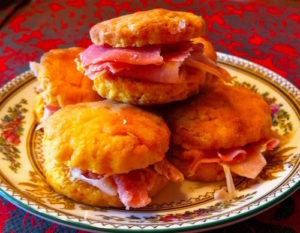 Within just a matter of minutes, complete strangers forged new friendships, exchanged email addresses, and made plans to continue their friendship after the vacation.

That’s because our b & b breakfast table is a lot like your family’s table. It’s the gathering place to tell stories, catch up, or learn something new.

For our part of the world, the breakfast table is also the place for guests to share what they’ve discovered in Cape Charles or the Eastern Shore of Virginia.

For example, culinary adventures like Hook at Harvey as well as a much-touted craft beer experience at Cape Charles Brewing Company. By the way, they also have great food!

One of the most “can’t miss” discussions center around the exploration of natural treasures like the Barrier Island Center, the Savage Neck Dunes, and of course, Cape Charles’ very own magical sunsets.

As Yeats once said,

“There are no strangers here, only friends you haven’t yet met.”

I watch as friends who have yet to meet find how small the world really is. Many of our guests keep in touch with each other long after they return home. Some even make plans to reunite at the Inn each year.

Want the Breakfast Matchmaker to introduce you to some fun, exciting new friends? I do it every day over a gourmet breakfast filled with laughter and love.

Join us! Book your reservation here.