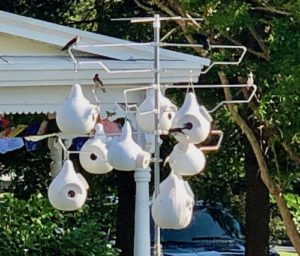 They flap and glide, feeding high in the air. Then with wings tucked, these birds will dive with great speed and agility to their nests. Ah, the Purple Martin!

Largest of the North American swallows, the males are glossy blue while the females are brown. Both have forked tails like their Barn Swallow cousins.

But here at the Inn, they have another major attribute; Purple Martins are a favorite entertainer for our guests. It’s like having a miniature neighborhood right outside our breakfast window.

Our neighbors Kate and Michael, did the research and put in these great feeders  shown above about 2 years ago. Purple Martins arrived within one week after they went up! To say Kate was excited is an understatement. We and our guests at the Bay Haven Inn of Cape Charles have most certainly benefited from their ingenuity!

With glossy aerial acrobatics and their constant chattering, guests never tire of watching them. And they have become the talk of Cape Charles!

The Purple Martin Becomes an Urbanite 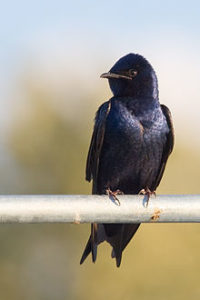 This interesting bird, a year-round insectivore, originally foraged for food on farms. But
since people began taking such an interest in them, they have gravitated to towns, cities, and parks, preferring artificial houses in which to nest. And that makes us the lucky ones!

They swoon over the park near us in Cape Charles and land perfectly in their gourd houses, providing morning entertainment for our guests with their pre-breakfast coffee.

How Martins Feed and Fly

One of the most fascinating aspects of this bird is how they eat and fly. Purple Martins will often exceed 150 feet and sometimes as much as 500 feet off the ground, searching for flying insects, then eating them in mid-air!

In fact, they find and consume all of their food while in flight. When they find their prey, they will turn suddenly sideways or upward, increase speed and flare their tails to trap the insect. Rarely do they touch ground. Even the water they consume is done so while skimming the surface of a pond.

Feeding during the day, they bring insects to their young by diving headlong back to their nest. So, what kind of treats do they eat and bring to their young? Beetles, flies, dragonflies, damselflies, grasshoppers, crickets, leafhoppers, butterflies, moths, bees, wasps, caddisflies, cicadas, termites, spiders, and mayflies.

Their Dependence on Humans 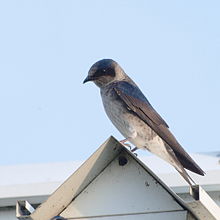 Purple Martins’ dependence on humans started centuries ago, according to the Audubon Society. American Indians were the ones that hollowed out gourds for the birds to use as a nesting site.

These valuable birds were a source of pest control for them, as well as chasing off vultures which picked at drying meats and hides.

Today, Purple Martins still prefer the housing that humans provide, with conditions! Martins are a runway bird, meaning they require open space. They do not like to be near trees. Nor do they like having plants at the bottom of the pole because of the possibility of predators.

If you can meet these conditions, you’ll most likely have friends for life!

How to Attract This Big Swallow

On their own, Purple Martins usually build their nests out of twigs, straw, and pine needles. They’ve also been known to build a mud dam in front of their nests. They are pretty serious about avoiding predators!

If you want to attract this lyrical bird, however, it’s all about location. They prefer to have their housing in open areas with clear flyways. Choose a center spot, at least 40-60 feet away from trees, but within 100 feet of human housing.

In the southern half of their breeding range, Martins may nest in a place that’s within 25 feet of trees. Generally speaking, though, open areas are preferable.

If you want to provide bedding, these birds love Aspen bedding. It has no aromatic smells or oils. Soft, light, and fluffy, they accept it quite well.

Nesting Habits of the Purple Martin 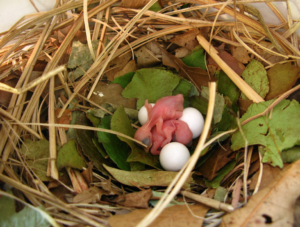 Another fascinating aspect to this bird is how they nest. Once they’ve gathered twigs, pine needles, and straw, they line the bowl of the nest with green leaves. No one knows why.

It’s been suggested that the leaves may act as an insecticide, or it may help regulate moisture and temperature levels within the nest. Then again, the leaves could be used to keep the nest clean. We just don’t know and that makes them all the more intriguing!

This popular and fascinating bird has admirers all over the US, who build housing communities for them, just to enjoy watching them. But you don’t have to do that. You can watch them to your heart’s content right from our front porch! Book here.